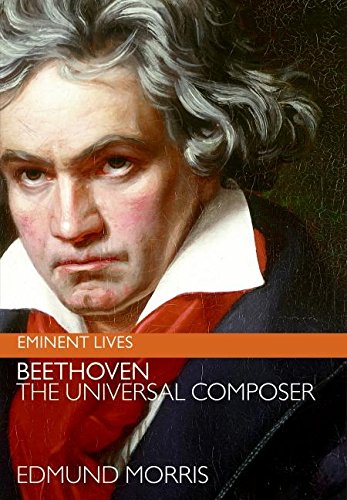 This addition to the Eminent Lives Series by Pulitzer-winning biographer Morris ( ; ) does not disappoint. The author provides a close analysis of only one cantata, the early (written at 19) and relatively obscure , but leaves no doubt he could easily do the same for the more radical and magisterial works, which are "bothersome to orthodox opinion" about Beethoven's time, were the ground not so well trodden. Outsize in talent, Beethoven was a difficult, ugly little man, uncomfortable with women ( and a certain amount of "groupie" attention notwithstanding, he seems never to have had a successful romantic relationship), snobbish and a raving egotist. His seven-year legal battle with his sister-in-law over custody of her son assumed "manic proportions" and set him "drifting toward paranoia." Yet not only did his prodigious productivity never falter, his psychosis, alcoholism, chronic rages, famous deafness and increasing illness ("dropsy"—edema—cirrhosis and possibly lupus killed him at 56) actually seemed to spur his genius: the greatest works are the later ones. Morris clearly admires his subject not only for the work but also for his constant fight against the odds, and he has written an ideal biography for the general reader.