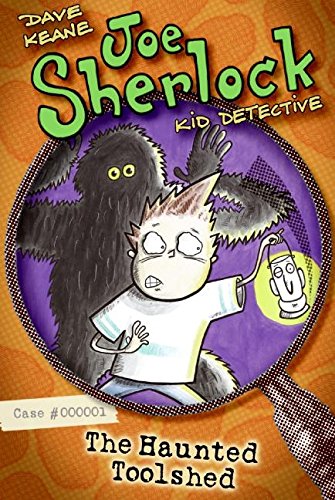 This farcical romp launches the Joe Sherlock, Kid Detective series and marks Keane's children's book debut. Appropriately known by his surname alone, the boy narrator declares, "I was born with a natural gift for solving mysteries." Perhaps, yet this slapstick-laced story of his first case reveals some of Sherlock's bumbling moves, many of which are certainly chuckle-worthy. A perplexed neighbor hires Sherlock to get to the bottom of some curious goings-on: moaning noises emanate from his toolshed, and a bundt cake baked by the man's mother (who suffers from a case of flatulence) has mysteriously disappeared from the kitchen—as has his mother's glass eye. Sherlock, equipped with his sister Hailey's "Girl Chat Sleepover backpack" and matching walkie-talkie, sets off into the night to track down the culprit. His overactive imagination kicks in, and he suspects the Grim Reaper is tapping him on the back and that a Tyrannosaurus rex is going to snatch him up (and swallow him whole "like a Swedish meatball"). As Keane's comically convoluted plot proceeds, Hailey delivers some of the liveliest lines. Kids looking for a robust mystery may want to venture elsewhere, but reluctant readers will welcome the brief chapters (presented in large type), zany half-tone spot art (also by Keane) and zippy pace. More of Sherlock's shenanigans fill (0-06-076187-3; paper 0-06-076186-5), due the same month. Ages 7-10.