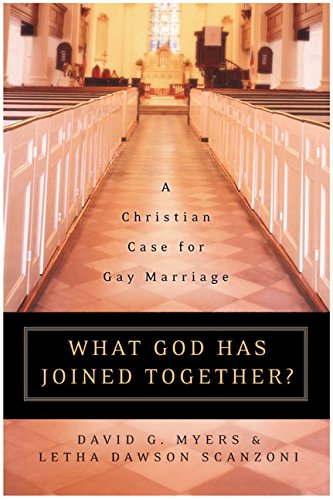 What God Has Joined Together? A Christian Case for Gay Marriage

Coauthors Myers (who serves on the board of the National Marriage Project) and Scanzoni (of the Evangelical and Ecumenical Women's Caucus) "take marriage... [and] our Christian faith seriously." Bringing together those two commitments to build a Christian case for gay marriage, they begin by arguing that marriage is good for society: marriage correlates to longevity; boys raised by married parents are less likely to commit crimes; married moms are less prone to depression than single moms and so forth. Why, the authors ask, should these good things be reserved for heterosexuals? They then consider what Scripture has to say about sexual orientation, rehearsing the by now familiar arguments that Jesus has nothing to say about homosexuality, and though the Bible does talk occasionally about homosexual sex, it does not deal with "loving committed homosexual relationships." Myers and Scanzoni's tone is calm, respectful and balanced. For example, though they present some of the latest scientific evidence about the causes of sexual orientation (including a chart of "mental rotation scores by sexual orientation"!), they also freely admit that scientific studies on this issue are still in the early stages, and that even conclusive scientific information "cannot... resolve values questions." With its traditional defense of marriage and its progressive embrace of same-sex relationships, this book cannot be pigeonholed, and that in itself is refreshing.