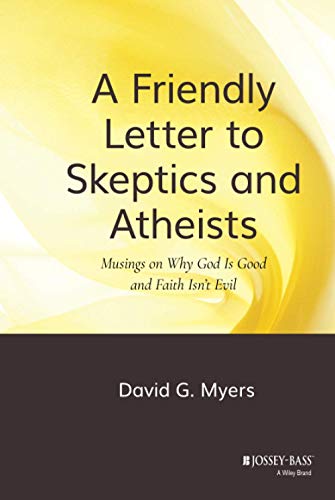 A Friendly Letter to Skeptics and Atheists: Musings on Why God Is Good and Faith Isn’t Evil

Social psychologist Myers adds to the numerous apologetic texts that have emerged since the neoatheist movement began. But this quick jaunt into potentially dangerous waters is head and shoulders above the rest. The author admits that many people throughout history who have claimed to believe in God have caused much evil in the world. He is respectful of his atheist interlocutors, like Richard Dawkins, preferring to discuss how “Surely, in some ways I’m wrong, you’re wrong, we’re all wrong.” Believers and skeptics could learn much from each other, and the author’s willingness to build a bridge between two sometimes hostile territories is what makes his work so welcome. Myers’s psychological training enables him to grasp the human person in a unique way, and he is able to introduce an intellectual element into the God debate. While never attempting to prove that God exists, Myers works to show that religious people can be faithful and psychologically healthy.