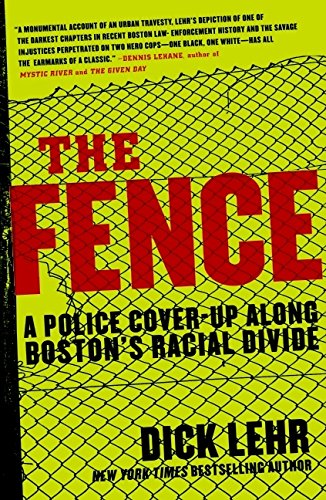 The Fence: A Police Cover-up Along Boston’s Racial Divide

Mired in the racial conflicts of a divided city, Lehr, coauthor of the bestselling , details one of the most controversial cases in the annals of the Boston Police Department, involving a brutal assault on a black plainclothes officer by his fellow cops and the resulting 1998 civil rights trial against the police force. Not only does Lehr paint the racial and political turbulence of Boston at the time, but he explores the cultural backgrounds of the black officer, Michael Cox; his attacker and fellow officer, Kenny Conley; and Robert “Smut” Brown, a drug dealer involved in the killing that started it all. Cox, who responded to the murder and chased after the car carrying the suspects, was beaten very severely by his overzealous colleagues, waited for an administrative apology and got only a coverup by the department. What followed was a sensational trial with all of the key ingredients of police brutality and a “solid blue code of silence,” with no winners. Jolting, nightmarish and potent, this true cop yarn bests any bogus reality show or overblown tabloid tale with its hard-boiled spin. 8 pages of b&w photos; 1 map.