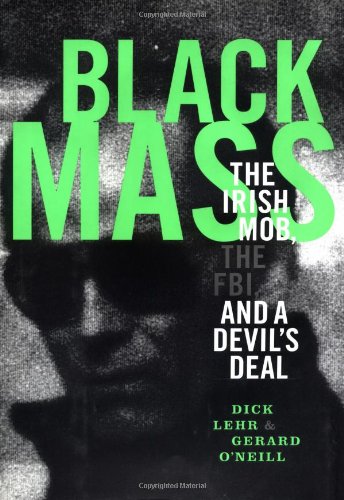 Black Mass: The Irish Mob, the FBI, and a Devil's Deal

A triumph of investigative reporting, this full-bodied true-crime saga by two Boston Globe reporters is a cautionary tale about FBI corruption and the abuse of power. Gangster James ""Whitey"" Bulger ruled Boston's Irish mob, and his wary collaboration with the Italian Mafia, which he detested, was the cornerstone of the city's balkanized criminal underworld. (His younger brother, Billy Bulger, was the iron-fisted president of the state senate and later president of the University of Massachusetts.) Few suspected that Whitey Bulger and his partner, crime boss Stevie Flemmi, were both FBI informants; their squealing helped the FBI to put a score of mobsters in jail and wipe out the Angiulo crime family. Here O'Neill and Lehr (Pulitzer winner and Pulitzer finalist, respectively, and coauthors of The Underboss: The Rise and Fall of a Mafia Family) maintain that overzealous FBI Agent John Connolly, who was Whitey's handler, and Agent John Morris, Flemmi's handler, ""coddled, conspired and protected the mobsters in a way that for all practical purposes had given them a license to kill."" FBI agents looked the other way while Bulger and Flemmi went on a 1980s crime spree that, according to witnesses, included extortion, bank robberies, drug trafficking and a string of unsolved murders. This complex, dramatic tale climaxes with a 1998 federal hearing that found that Connolly and Morris had essentially fictionalized FBI internal records to downplay the stoolies' crimes while overstating their value to the Bureau. In 1999, a grand jury probe launched by Attorney General Janet Reno led to Connolly's arrest on charges of racketeering and obstruction of justice (he's now out on bail). Also named in the indictment were Flemmi, already arrested by state police in 1995, and Bulger, now a fugitive on the FBI's Ten Most Wanted List. This in-depth look at the FBI's war against the Mafia includes the first-ever secret recording of a Mafia induction ceremony, complete with pricking of fingers and blood oaths. (June)
close
Details