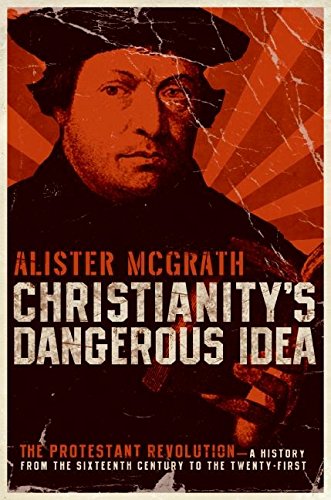 Christianity’s Dangerous Idea: The Protestant Revolution—A History from the Sixteenth Century to the Twenty-First

This is McGrath’s third book title borrowed from his atheist bête noir Richard Dawkins. But don’t let the titular borrowings fool you: this is an original and important book. Someone had to imitate the long, popular works of history being written on secular subjects from Lewis & Clark to FDR, and McGrath has the theological and historical expertise necessary to tell a story stretching from the Reformation’s origins in the 16th century to today. The “dangerous idea” was Martin Luther’s: that individual believers could and should read the Bible for themselves. The result was occasionally violent (as in the peasants’ revolt and the English Civil War), occasionally brilliant (musicians like Bach, theologians like Calvin and Jonathan Edwards, poets like Milton) and certainly world altering (the Calvinist Reformation clearing space for the rise of secular science and capitalism). McGrath concludes not with the faith practices of present-day England or America, but with the increasingly Pentecostal global south. The book occasionally falls into the dry tone of a textbook and assumes points that historians would want to debate, but is still the most readable introduction to the history, theology and present-day practices of Protestantism.