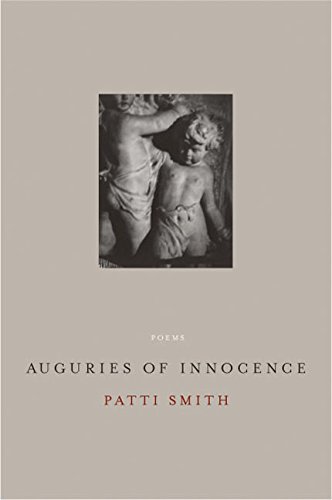 Smith's fans remain legion; her 1975 album , a masterpiece, continues to influence and inspire. Her writings, appearing over the years following the band's '80s dormancy, have garnered a cult following not unlike that of Charles Bukowski. The press chat quotes the following from a poem called "The Long Road": "We broke our mother's heart and became ourselves./ We proceeded to breathe and therefore to leave,/ drunken startled beings, each of us a god." It's hard to imagine those lines in a book published by Ecco without Smith to back them up. Yet they do convey what can only be called Smith's mystique, and the book as whole effectively transmits the affect and aura, as well as the innocence, that make her a rock star: one believes in her. There are better lines and poems among the 24 short lyrics (along with the long, diffuse "Birds of Iraq"); the book certainly eclipses, say, Billy Corgan's recent . There are more polished books of poems by bandleaders (David Berman's and Jeff Tweedy's come to mind), but these poems allow access to a major artist's thoughts and preoccupations.