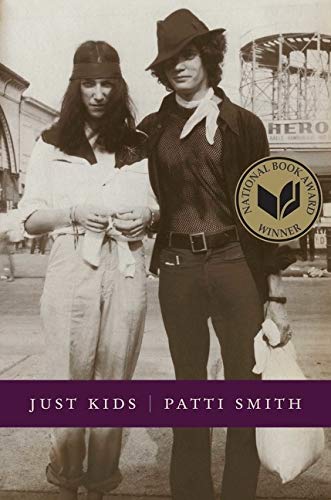 In 1967, 21-year-old singer–song writer Smith, determined to make art her life and dissatisfied with the lack of opportunities in Philadelphia to live this life, left her family behind for a new life in Brooklyn. When she discovered that the friends with whom she was to have lived had moved, she soon found herself homeless, jobless, and hungry. Through a series of events, she met a young man named Robert Mapplethorpe who changed her life—and in her typically lyrical and poignant manner Smith describes the start of a romance and lifelong friendship with this man: “It was the summer Coltrane died. Flower children raised their arms... and Jimi Hendrix set his guitar in flames in Monterey. It was the summer of , and the summer of love....” This beautifully crafted love letter to her friend (who died in 1989) functions as a memento mori of a relationship fueled by a passion for art and writing. Smith transports readers to what seemed like halcyon days for art and artists in New York as she shares tales of the denizens of Max's Kansas City, the Hotel Chelsea, Scribner's, Brentano's, and Strand bookstores. In the lobby of the Chelsea, where she and Mapplethorpe lived for many years, she got to know William Burroughs, Allen Ginsberg, Jimi Hendrix, Janis Joplin, and Johnny Winter. Most affecting in this tender and tough memoir, however, is her deep love for Mapplethorpe and her abiding belief in his genius. Smith's elegant eulogy helps to explain the chaos and the creativity so embedded in that earlier time and in Mapplethorpe's life and work.