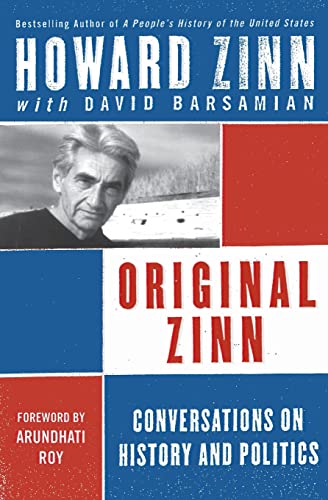 Zinn's newest book (of more than 20 published) collects eight radio interviews conducted with the Boston University history professor emeritus between August 2002 and February 2005 by Barsamian, founder of Alternative Radio, in Boulder, Colo. Barsamian, who is clearly sympathetic to Zinn's radical views on such subjects as the war in Iraq, art and civil disobedience as political tools, Martin Luther King Jr. and the Kennedy brothers, largely poses softball questions. The octogenarian Zinn thrives on them, explaining cogently and forcefully why world peace must predominate, rather than American military might, or how artists challenge established social boundaries. In discussing domestic politics, Zinn continues his decades-long advocacy of pulling up the poor through social engineering rather than failed programs already in place. The book closes with the text of a speech by Zinn, "Against Discouragement," which he presented at Spelman College in 2005, where he had been fired in 1963 because of his crusading for civil rights. Enthusiasts who hang on Zinn's every word will enjoy this slim paperback original; newcomers may be better off starting with his more substantial work.