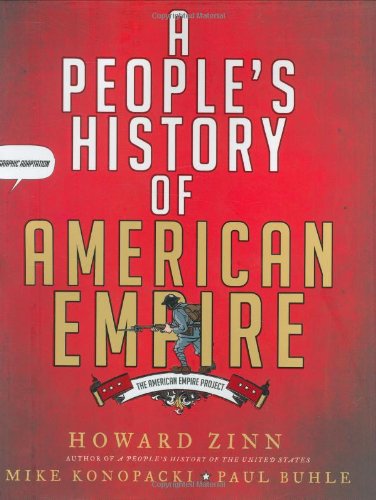 A People's History of American Empire: A Graphic Adaptation

This “graphic adaptation” of Howard Zinn's is, on almost every level, a disappointment. Its basic concept seems to be a Cliff's Notes version of the original, implying that the comics format makes information more accessible, without realizing that perhaps information might be lost in the process. The problems begin with introducing a caricature of Zinn as the narrator. We see Zinn at a podium, speaking the text of his book. One might suppose Zinn is an eccentric old professor, and this caricature does him no favors. From there the caricatures continue. Weakly rendered versions of American figures follow: the artwork by Konopacki resembles a high school yearbook artist's “humor” drawings. None of this would be quite so offensive if it wasn't such a squandered opportunity. Historical and polemical comics can be done well (James Sturm, Jack Jackson, Joe Sacco and others are masters of it), but when the artwork detracts and the whole thing feels like a grade-school exercise, it's hard to take seriously. And that's too bad, as Zinn is an important voice. In this case, however, he's been silenced.