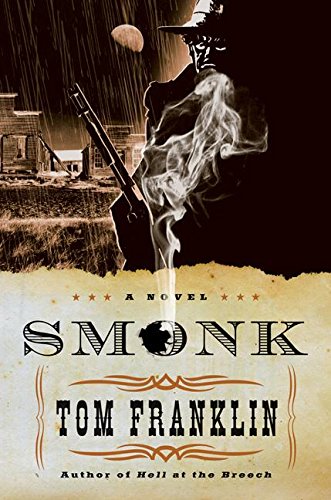 E.O. Smonk is an ugly, unwashed, murdering rapist who has terrorized the small town of Old Texas, Ala., for years. In 1911, the town summons Smonk to stand trial, and a nonstop blood-orgy of brutality and destruction is the result in Franklin's gloriously debauched second novel (following ). After Smonk's goons assault the Old Texas courthouse and kill the town's menfolk, reformed former Smonk associate turned lawman Will McKissick pursues Smonk. Meanwhile, a posse of Christian deputies chase teenage whore Evavangeline through the Gulf Coast, but the girl is a skilled killer, too, and the trail of her victims spans the region. McKissick follows Smonk's trail out of and back into Old Texas, while Evavangeline drifts into the town, where all the children are dead except McKissick's 12-year-old son and the widows lay out their dead husbands on their dining tables. The town's sordid past, about to be exposed, involves a rabies-ravaged one-armed preacher, a rabid dog named Lazarus the Redeemer, incest and a church full of dead boys dressed in Sunday best. Fast-paced and unrelentingly violent, Franklin's western isn't for everyone, but readers looking for a strange and savage tale can't go wrong.