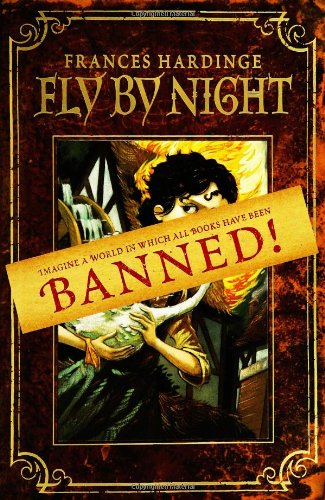 In a broken-down medieval kingdom where reading is forbidden, 12-year-old Mosca Mye is drawn to a traveling con artist who "brought phrases as vivid and strange as spices, and he smiled as he spoke, as if tasting them." Hardinge's stylish way with prose gives her sprawling debut fantasy a literate yet often silly tone that calls to mind Monty Python. Plucky Mosca rescues the con man—called Eponymous Clent—from the town stocks, accidentally burning down her uncle's mill in the process. Their journey unfolds against a wickedly complex political backdrop, a fragmented civilization largely run by guilds of locksmiths, boatmen and printers (the only ones allowed to decide which books will survive). Mosca and Clent find themselves embroiled in intrigue between the guilds, an entry point to a sly bit of allegory involving a secret printing press and "dangerous" pamphleteers ("Truth is dangerous. It topples palaces and kills kings.... And yet there is one thing that is more dangerous than Truth. Those who would silence Truth's voice are more destructive by far," a teacher reads aloud). Along with an infusion of high-camp fantasy, Hardinge firmly plants in the novel the heroine's serious love of reading, which informs nearly everything Mosca does ("I'd been hoarding words for years," she says in an introspective moment, "buying them from peddlers and carving them secretly into bits of bark so I wouldn't forget them"). And the setting is detailed and complex enough to inspire many sequels. Ages 10-up.