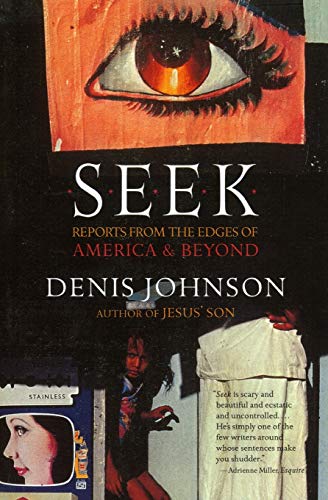 SEEK: Reports from the Edges of America & Beyond

As a fiction writer and poet, Johnson is known for his surreal portraits of the dispossessed lurking at the fringes of American life: the drifters, the jobless, the junkies and midnight DJ's. In this collection of 11 essays, which brings together pieces written over a 20-year period, he prefers to look at how those same individuals band together to form a new, often threatening, identity. His America is peopled with Christian Bikers in Texas, Alaskan frontiersmen, hippies both young and old, and right-wing militia members, all striving to create a life apart from the values associated with the mainstream middle-class. In addition to the essays on America, Johnson expands his canvas to take in the revolutions wrought by the dispossessed of the third world, in such places as Liberia, Afghanistan and Somalia. He finds true believers at every crossroad, whether it's in God, government, guns or all three, and manages to assess the quality of their conviction by travelling among them. Though Johnson is always clearly present as a narrator, he often only refers to himself in the third person or as a separate character altogether. This unusual narrative style infuses many of the essays with an askew, out-of-body point of view, which, while taxing to his credibility as a reporter, adds sincerity to his plight as a human. As a journalist, Johnson searches for something beyond headlines and, at least in this collection, that makes for an intriguing and insightful investigation.