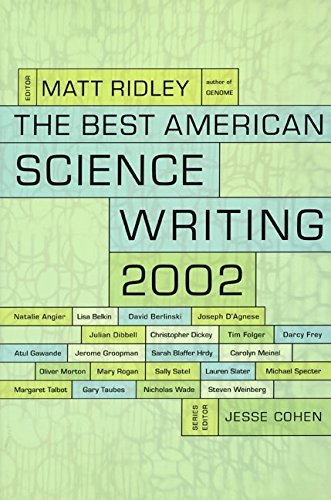 The 21 articles in this anthology represent the finest works of science journalism from the last year, culled from periodicals like , the , , , and the. September 11 is a recurring theme here, which may be why editor and author Ridley's picks for this third annual edition are so charged with pessimism, ambivalence and uncertainty. In "The Thirty Years' War," Jerome Groopman announces that the battle against cancer has been lost. Nicholas Wade relates the story of a controversial debunker of environmentalists' most cherished beliefs, and Sally Satel's "Medicine's Race Problem" challenges melting-pot platitudes, arguing that ignoring the genetics of race can be bad for some patients' health. Christopher Dickey delivers a dose of absurd humor in "I Love My Glow Bunny," in which art and science collide in genetically modified lab rabbit number 5256, and Joseph D'Agnese inspires in "Brothers With Heart," about four brother-doctors who envision a revolutionary way to save lives with donor organs. Soul-searching isn't all that this collection is about, however. There are old-fashioned wonders here as well, such as Oliver Morton's "Shadow Science," in which he acquaints readers with an astronomer who has observed distant Earth-like planets. Provocative and informative, engrossing, this sparkling anthology is a treat for all science enthusiasts, armchair and otherwise.