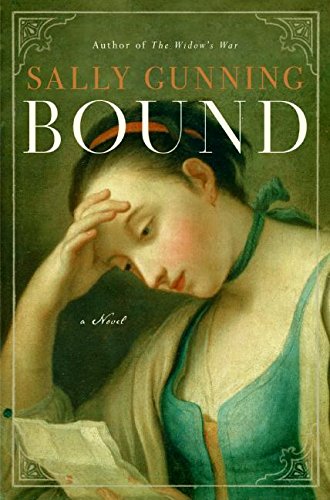 In Gunning’s latest colonial page-turner, seven-year-old Alice Cole travels with her family from 1756 London to the New World, dreaming of a big house in Philadelphia and a new life. Her mother and brothers die on board and are buried at sea; the ship docks in Boston rather than Philadelphia; there, her father indentures her for 11 years without a backward glance. Alice does housework for the family of Simeon Morton of Dedham, in whose house she is treated almost like a second daughter, becoming constant companion to 10-year-old Abigail, or “Nabby.” When Nabby marries Emery Verley of Medfield, Alice’s indenture is signed over to him, but the Verley household turns out to be an abusive one. Alice flees and winds up on Satucket, Cape Cod, where Lyddie Berry, heroine of Gunning’s , and her companion, the lawyer Eben Freeman, give her shelter and a job. Alice works hard for them, and they grow fond of her, but when Alice discovers she’s pregnant, she embarks on a journey of deceit and lies, one that comes to a bitter end. Gunning weaves a horrifying, spellbinding story of colonial indenture’s cruelties and a meditation on the meaning of freedom.