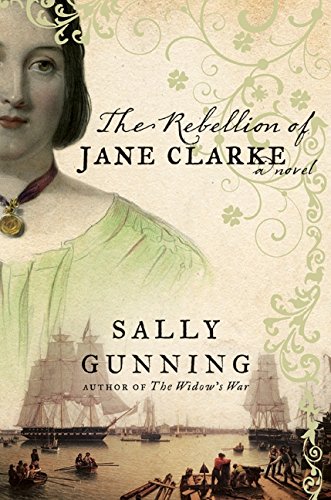 The Rebellion of Jane Clarke

Gunning's blazing third historical (after ) takes readers into the heart of Revolutionary War–era Boston, where young Jane Clarke has been sent to care for her great-aunt Gill after refusing to marry the man her loyalist father has chosen for her. Not long after settling into her aunt's house near the British Custom House, Jane is thrust into the milieu of violence and intrigue that eventually leads to a declaration of independence by the American colonists. She befriends the bookseller Henry Knox and meets John Adams, who employs her brother as a clerk. As tensions mount, Jane watches the men around her grow more aggressive in their aversion to British rule, and less concerned with truth. When she is caught up in the Boston Massacre, she must come to terms with the importance of honesty over personal and political passions. There's a history textbook's worth of well-done cameos, but it's Gunning's fluid writing and attention to the larger issues of human nature that really make this move. Good historical fiction offers new perspectives on old stories. This book succeeds handily at the task.