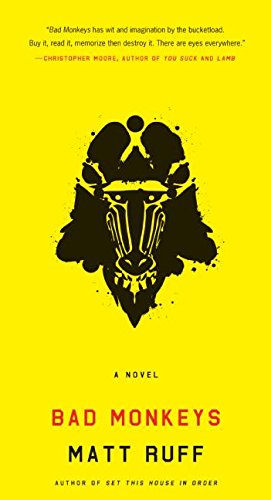 In this clever SF thriller from Ruff ( ), almost everyone is a bad monkey of some kind, but only Jane Charlotte is a self-confessed member of “The Department for the Final Disposition of Irredeemable Persons.” Or is she? In a series of sessions with a psychotherapist in the Las Vegas County Jail “nut wing,” Jane tells the story of her early life in San Francisco and her assimilation into the “Bad Monkeys,” an organization devoted to fighting evil. Crazy or sane, Jane is still a murderer, whether she used a weapon like the NC gun, which kills someone using Natural Causes, or more prosaic weaponry. Still, nothing is quite what it seems as Jane's initial story of tracking a serial killer janitor comes under scrutiny and the initial facts about her brother, Phil, get turned on their head. At times the twists are enough to give the reader whiplash. Ruff's expert characterization of Jane and agile manipulation of layers of reality ground the novel and make it more than just a Philip K. Dick rip-off.