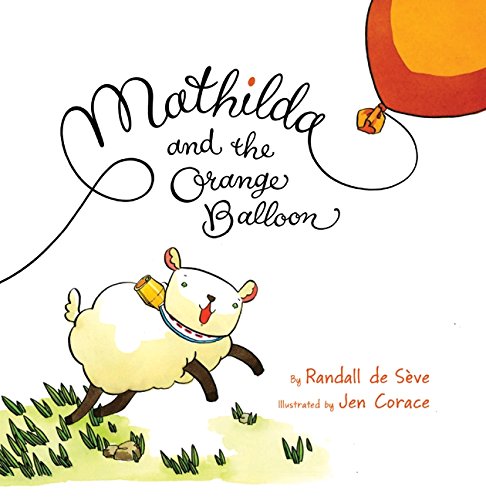 Mathilda and the Orange Balloon

Corace’s ( ) illustrations are the principal charm of this quirky story about a thought experiment done by a flock of sheep. “Orange balloon...” says Mathilda, after one floats over her pasture. “That’s me!” Full of joy at the magnificent sight she’s just seen, she works to convince her fellow sheep that there’s no reason she can’t, in fact, an orange balloon. The pleasures of Corace’s work include the authoritative black outlines of the sheep, their creamy fleece and smashed-flat faces, and Mathilda’s morphing into a tiger, falling leaf, and fiery sun, all of which embody “orange” to the sheep. The visual and emotional apex comes as Mathilda envisions herself as a soaring balloon, orange, puffy, and most of all happy. Her realization frees the rest of the flock: “Then the sheep realized—anything was possible.” One envisions himself a sailor on a boat, another a yellow school bus, and a third a honey bee. De Sève’s ( ) reasoning may elude very young readers, but the sounds and feelings of the words will not, and Corace’s vignettes provide satisfying clarity. Ages 3–6.