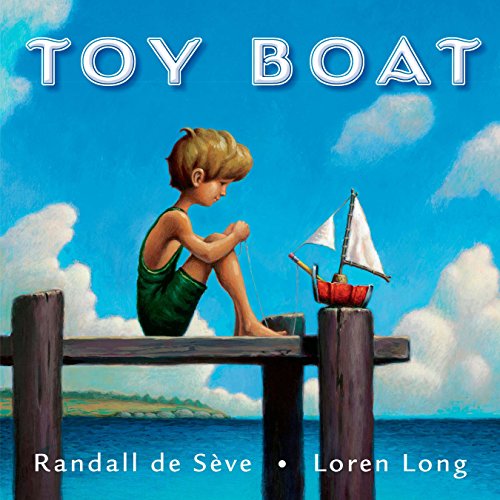 A boy’s handmade toy boat plays the metaphorical role of a child longing for independence in De Sève’s auspicious first picture book. The text begins in simple language that lightly implies a parent/child bond: “The boy loved the boat, and they were never apart. They bathed together. They slept together.” Every day the boy sails the boat in the lake, holding onto it with a string. Usually the boat feels content, but occasionally the sight of big boats awakens its curiosity about “what it would feel like to sail free.” A sudden change in the weather occasions the toy boat’s premature adventure out of the boy’s protective grasp, described in suspenseful text and acrylics that imaginatively extend De Sève’s story. Long (the re-illustrated ) shrewdly illustrates no persons other than David, even though David’s mother plays a pivotal part. Rather, the toy boat has a face (readers should look carefully at the cork holding its mast) and, as it encounters the big boats at last, each wears its own visible personality. A giant ferry occupying most of a spread bears down on the toy boat, its windows, decks and trimmings shaped into an enraged visage, complete with glaring eyes and pursed lips; the toy boat shrinks dramatically in the wake of a huge speedboat depicted as a flame-colored shark. Not until the reassuring conclusion can the toy boat again be seen from the boy’s perspective. A resonant tale with wide appeal. Ages 2-up.