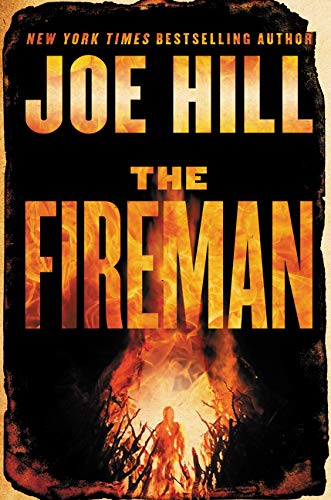 In Hill's superb supernatural thriller, the world is falling apart in a maelstrom of flame and fury. A spore dubbed Dragonscale infects people, draws patterns on their skin, and eventually makes them spontaneously combust%E2%80%94and it's rapidly spreading. School nurse Harper Grayson volunteers at a local hospital in Concord, N.H., until it burns down. Soon she discovers that not only is she infected but she's also pregnant. As the beautiful filigreed markings of Dragonscale start to flourish on her body, she vows to do anything to bring her baby safely into the world. Her husband, Jakob, doesn't want the baby and attacks Harper when he realizes she wants to keep it. Harper flees and encounters John Rookwood, a near-mythical figure known as the Fireman. He takes her to Camp Wyndham, where the infected have learned to control and harness what they call the Bright%E2%80%94the flames that smolder just beneath their skin. Harper finds purpose there, but Jakob has found a purpose too: he's joined the Cremation Crews, brutal marauders who kill the infected on sight. When the peace of the camp is threatened, Harper, John, and their friends band together. The good-hearted Harper is a captivating heroine, the peaceful eye in a storm of evil that threatens to harm everyone she holds dear, and it's impossible not to root for her. Hill has followed 2013's NOS4A2 with a tremendous, heartrending epic of bravery and love set in a fully realized and terrifying apocalyptic world, where hope lies in the simplest of gestures and the fullest of hearts. (May)
close
Details