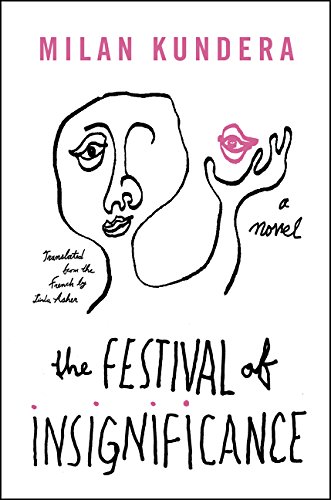 The Festival of Insignificance

After over a decade away from writing novels, Kundera (Ignorance) returns with this slight lark about four laissez-faire Parisians. In the tradition of existential comedies, the drama is in the dialogue. The four characters—Alain, Ramon, Charles, and Caliban—spend their days in Paris’s gardens, museums, and cafes, chatting and philosophizing. During a daytime stroll in Luxembourg Garden, Ramon bumps into a former colleague who, lying about having cancer, asks for Ramon’s help planning his birthday/death party. Similar to Kundera’s previous novels, the book uses levity and humor to comprehend the lasting effects of horrors perpetrated during World War II, though it’s set in the present. Much time is spent debating disparate, seemingly random issues: Stalin’s decision to rename a German town Kaliningrad, a marionette play that Charles imagines, a fake language Caliban invents for dinner parties. Although events converge at the party, nothing much actually happens. The four friends’ conversations are frivolous yet weighty, leaping from idle musings to grandiose declarations—from the sexual worth of a woman’s navel to the nature of motherhood, from Schopenhauer’s relationship to Kant to Stalin’s conquest of Eastern Europe. This novel is a fitting bookend to Kundera’s long career intersecting the absurd and the moral. It is also an argument for more books like it: “We’ve known for a long time that it was no longer possible to overturn this world, nor reshape it, nor head off its dangerous headlong rush. There’s been only one possible resistance: to not take it seriously.” (June)
close
Details