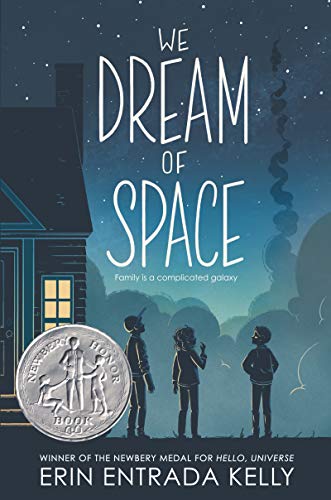 We Dream of Space

Newbery Award–winner Kelly (Hello, Universe) follows three Delaware siblings in the weeks leading up to the January 1986 launch of the Challenger. Practical, schematics-interested Bird, 12, dreams of being NASA’s “first female shuttle commander.” Her twin, Fitch, who battles a temper, spends his afternoons at the arcade, waiting until the last minute to head home to their quarreling, sometimes volatile parents. After Cash, the twins’ brooding 13-year-old brother, fails seventh grade, winds up in his siblings’ grade, and is dropped from the basketball team, he breaks his wrist and ends up in a cast. Meanwhile, their science teacher endeavors to build her students’ excitement for NASA’s Challenger launch—and for a female teacher heading into space. But January 1986 is difficult for them all: Bird’s feelings of insignificance and Cash’s feelings of inadequacy grow, while Fitch is suspended for belittling a classmate in language similar to his fighting parents’. As Kelly’s chapters count down to the Challenger’s disastrous launch, they document a family in crisis and three untethered siblings. With painfully accurate insight and clarity, Kelly shows the incredible power of words—the irreparable damage they inflict and their ability to uplift—while crafting a captivating story about family’s enduring bonds. Ages 8–12. [em]Agent: Sara Crowe, Pippin Properties. (May) [/em]
close
Details