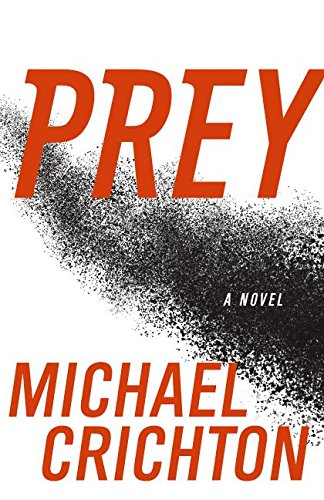 From the opening pages of Crichton's electrifying new thriller, his first in three years, readers will know they are in the hands of a master storyteller (, , etc.). The book begins with a brief intro noting the concerns of Crichton (and others) with the nascent field of nanotechnology, "the quest to build manmade machinery of extremely small size, on the order of... a hundred billionths of a meter"—for this is a cautionary novel, one with a compelling message, as well as a first-rate entertainment.

Rare for Crichton, the novel is told in the first person, by Jack Forman, a stay-at-home dad since he was fired from his job as a head programmer for a Silicon Valley firm. In the novel's first third, Crichton, shades of his , smartly explores sexual politics as Jack struggles with self-image and his growing suspicion that his dynamic wife, Julia, a v-p for the technology firm Xymos, is having an affair. But here, via several disturbing incidents, such as Jack's infant daughter developing a mysterious and painful rash, Crichton also seeds the intense drama that follows after Julia is hospitalized for an auto accident, and Jack is hired by Xymos to deal with trouble at the company's desert plant. There, he learns that Xymos is manufacturing nanoparticles that, working together via predator/prey software developed by Jack, are intended to serve as a camera for the military. The problem, as Crichton explains in several of the myriad (and not always seamlessly integrated) science lessons that bolster the narrative, is that groups of simple agents acting on simple instructions, without a central control, will evolve unpredictable, complex behaviors (e.g., termites building a termite mound). To meet deadlines imposed by financial pressures, Xymos has taken considerable risks. One swarm of nanoparticles has escaped the lab and is now evolving quickly—adapting to desert conditions, feeding off mammalian flesh (including human), reproducing and learning mimicry—leading to the novel's shocking, downbeat ending.

Crichton is at the top of his considerable game here, dealing with a host of important themes (runaway technology, the deleterious influence of money on science) in a novel that's his most gripping since . In the long run, this new book won't prove as popular as that cultural touchstone (dinos, nanoparticles aren't), but it'll be a smash hit and justifiably so.