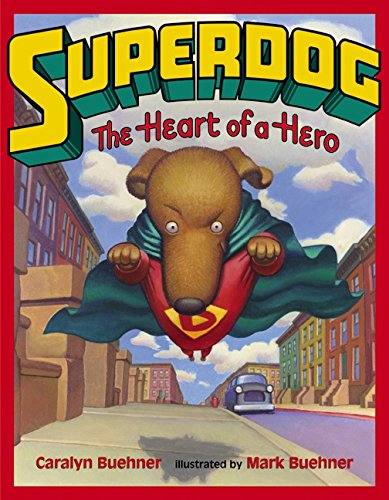 SUPERDOG: The Heart of a Hero

Not a bird, not a plane, but a super-determined dachshund named Dexter steals the show in the Buehners' ( ) picture book. Short of stature, Dex endures rude indifference or energetic taunting from the other pooches in the neighborhood as well as the bullying ringleader, a tomcat named Cleevis. But deep inside, Dex believes he has the heart of a hero, just like the characters in comic books and movies. The humble pup embarks on a rigorous training regimen and mail-orders a hero suit—complete with cape—to go along with his new buff body and attitude. Soon Dex's helpful feats earn him respect, gratitude and happiness—and the opportunity to show Cleevis how it's done. Caralyn Buehner's feel-good tale has a triumphal, never-smug tone that will strike a chord with underdogs everywhere. Mark Buehner infuses his velvety oil paintings with characteristic humor and warmth. He adds a few dashes of comic-book–style text blocks and panel art to underscore the superhero theme. Scenes of Dex flexing his muscles, panting during his sidewalk runs or sporting his green-and-red superdog outfit are laugh-out-loud funny. Elsewhere, shady brownstone stoops and colorful city storefronts and streets add extra flair to this dynamic effort. Ages 4-8.