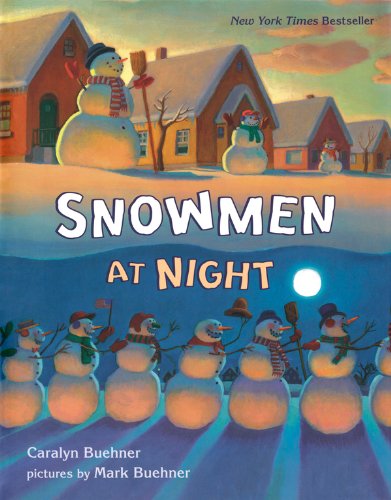 Not since Frosty paraded through the village square have snowmen enjoyed such a slip-sliding good time as they do in the Buehners' () latest flight of fancy. When a boy observes that the snowman he built the day before now looks droopy and disheveled, he imagines what happened to his snow creation during the night. Soon the boy pictures all the neighborhood snowmen gathered in the park for "ice-cold cocoa," a snowball fight, a round of making snow angels and more. Surely a full night of play—and a long glide back to their homes—must be the explanation. The rhythm of the rhyming text sometimes matches the rollicking spirit of the snowmen's wintry pursuits, but occasionally stumbles: "Then the snowman games begin: They line up in their places,/ each one anxious for his turn in the snowman races." The glee comes through at its most infectious in Mark Buehner's oil-and-acrylic paintings of the merrymakers, who look so delighted in their revelry that readers won't be able to help smiling in response. Bringing the brisk snap of the season to the fore, his scenes feature a natural light show, depicting an inky night sky and fluffy snow that glistens beneath moonlight and (street) lamplight, and eventually, the gradual brightening of dawn. Children will like being in on the secret here and eagle-eye readers will relish finding hidden figures in the shadows, clouds and snowdrifts. Ages 4-8.