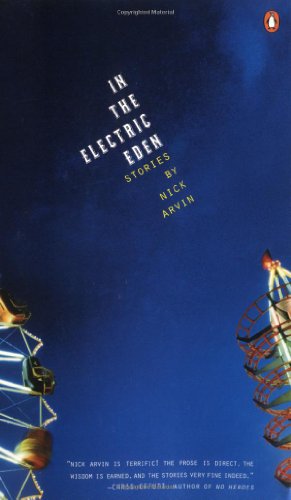 IN THE ELECTRIC EDEN

Machines, large and small—from an electric chair to a cell phone—are the inspiration for this cleverly conceived but uneven debut collection of 10 stories. Exploring the ways in which machines mediate human relationships, Arvin invests his stories' gadgets with heavy metaphorical significance. In "Electric Fence," the eponymous barrier serves as a symbol of alienation and greed, separating a woman from the woods she played in as a child. In "The Prototype," a man steals a new model SUV to impress an ex-girlfriend who likes trucks. The title story tells of the electrocution of Topsy, a man-killing elephant put to death at Coney Island in 1903, but is largely focused on the family of Topsy's final victim, a drunk who fed the elephant a lit cigarette, igniting the animal's rage. Here, as in many of the stories, Arvin paints his characters with broad strokes ("Fielding was a drinker, however, and when he drank his face became red"; "Despite Fielding's drinking binges, it was evident that Emma loved him very much"). In his strongest efforts, he links material objects and human emotions with a lighter touch. In the insightful and tender "Commemorating," a couple vacations on a beach in Florida that is stormed by marines in a routine but startling exercise. Shortly thereafter, the narrator's wife disappears. Ignorant of the abandonment, an ad man who was also on the beach annually sends the narrator commemorative junk—coffee mugs, T-shirts, bumper stickers—inadvertently marking the dissolution of his marriage. Arvin, a former engineer, strikes a rich cultural vein, but has yet to smoothly mesh machine lore and fluent storytelling.