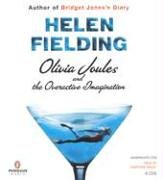 OLIVIA JOULES AND THE OVERACTIVE IMAGINATION