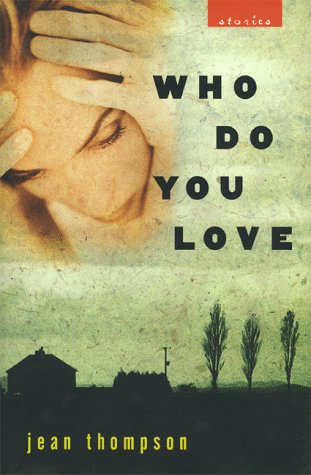 Who Do You Love: Stories

Lost souls populate the bleak terrain of Thompson's collection of 15 remarkable stories, most of which have appeared previously in prestigious magazines and prize collections. These hapless folk live precariously, seemingly trapped in an endless gray November; driving long distances to escape their pasts, only to confront new obstacles. Thompson occasionally spices her dead-on dialogue with flinty humor to counter the despair. Seminal moments abound, flashing back to 1967 in ""The Amish,"" where 10-year-old Barbara attends a campus protest with her father, Don, a former career soldier wounded in Vietnam, and hears him speak out passionately against the war. Elsewhere, do-gooders risk everything: Quinn, a well-meaning city cop working the graveyard shift, tries to save a woman's soul, then loses his heart to her in the process; social worker Judy Applebee of the title story faces the futility of her job, realizing she can never improve her clients' miserable lives. In ""Forever,"" a veteran reporter investigates a grisly small-town murder and meets the victim's innocent, grief-shattered boyfriend. Other stories center around heroin addiction, nursing homes, a kidnapping and the recovered memory movement. In less-skilled hands, these short narratives might seem grim and the characters hopelessly downtrodden, but Thompson, novelist and author of two critically acclaimed short-story collections (e.g., The Gasoline Wars), is smart enough to infuse even the saddest situation with a wry glimmer of hope. Comparisons to Raymond Carver's spare eloquence are apt, given Thompson's ability to deftly inscribe, while ennobling, her characters' isolation and suffering. (June)
close
Details