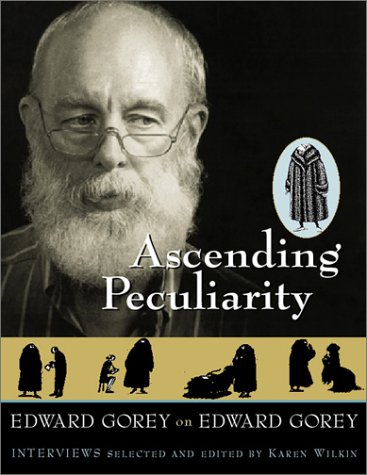 Will Gorey's curious Victorian households—scenes of disconcerting, dastardly deeds—and "crypto-Edwardian" characters fade into obscurity with his death? Not a chance. Cultish popularity has yielded to international fascination with this fecund author-artist's carefully crosshatched drawings, quaint enchiridions and fey fiction. Curator/art critic Wilkin expands on (1996), which she coauthored, with this illustrated collection of 21 interviews that reveal Gorey's interests, foibles and habits. Gorey (1925–1999) studied at the Art Institute of Chicago, was drafted in 1943 (training in Utah, he began his writing career with "unpresentable... closet dramas") and majored in French at Harvard. He initially published his books through his own Fantod Press. More than 100 titles followed (1953), and his readership expanded in 1972 with the first of the anthologies. Interviews culled from magazines (, , ), newspapers, NPR and TV (Dick Cavett) reveal Gorey's cultural influences and inspirations (cats, crime narratives, Louis Feuillade, Buster Keaton, the New York City Ballet, Ivy Compton-Burnett) along with minutiae and insights into his erudite, eccentric humor. Best of all, readers glimpse Gorey's creative processes: the texts almost always preceded the drawings, for instance. On his work he was characteristically irreverent: "I get a certain enjoyment out of doing it; but after it's done, I have no feeling for it at all." Stephen Schiff's 1992 "Edward Gorey and the Tao of Nonsense" (from the) provides an outstanding overview. This is an exhilarating excursion into an extraordinary imagination (with numerous artistic tips and resources). 8 photos, 150 drawings.