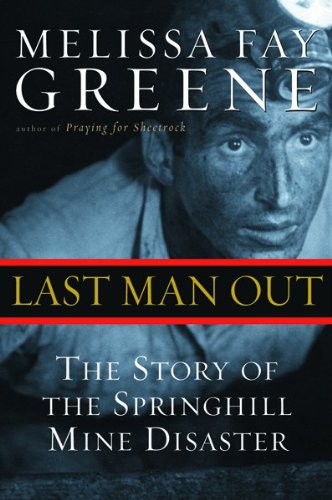 LAST MAN OUT: The Story of the Springhill Mine Disaster

The mining disaster that killed 75 men in Nova Scotia in 1958 is rich terrain for a good yarn, but Greene's book about the miners who survived and those who didn't comes up short. Her research is adequate, but surprisingly, NBA finalist Greene fails to bring this tale to life. In re-creating the events leading up to and following the catastrophe, imagined dialogue rings inauthentic: that miners gathered around a colleague with "a mile of rock" pinning his arm down exclaim, "Oh my God, oh my God," and "Oh Jesus, oh Jesus," seems a tad polite, even for 1950s Canada. Similarly, the author's overreliance on exclamation points in dialogue forces tension and excitement. As well, the miner subculture isn't effectively captured, and the buildup to the explosion, known as the Bump, is bereft of suspense. The story gets interesting after the rescue of 19 men, who are subsequently exploited by various factions, including the media and the public relations aide to a segregationist U.S. governor, who arranges to fly the survivors and their families to a beach resort the governor's state is looking to promote. The presumed PR goes horribly awry when it's learned that one miner is black, as are his 12 children. Greene (; ) does prove successful in her fascinating narrative on this miner—an amateur musician known as "the Singing Miner" and Canada's Citizen of the Year in 1958. But sadly, his is the only head that Greene succeeds in getting into.