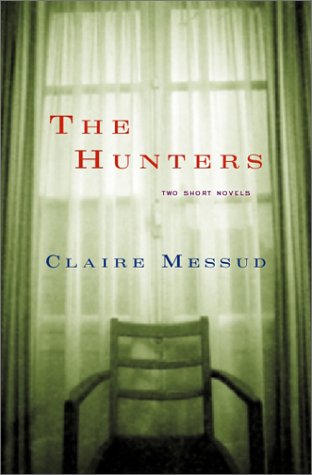 These two short novels have nothing in common except for providing the pleasure of seeing a writer of enormous skill and stylistic grace excel in crafting two very different fictions. "A Simple Tale" traces the life of Maria Poniatowski, a Toronto cleaning woman whose last client has become incapacitated with age and must soon enter a nursing home. Her deterioration marks the end of an era for the 70ish Maria, who reflects on a "simple life" that is soon revealed to consist of a series of horrifying disruptions: her transfer as a teenager from her village in the Ukraine to a series of Nazi labor camps; her arrival in Canada as a displaced person after the war; her son's marriage to the wrong woman; her husband's death. Messud (; ) builds a powerful and resonant story out of the simplest and seemingly most ordinary of domestic details: Maria's teatime with her elderly client, her plastic furniture-covers, a painting of a tropical seascape. "The Hunters" is a world away from Maria Poniatowski's Toronto—set in London and narrated by an American academic who has taken to spying on her two downstairs neighbors, a mother and daughter who raise rabbits. "The hunters" is what the daughter, a "suet of a woman," calls the rabbits, adding, "Although they're more like 'the hunted,' in this world, wouldn't you say?" Just as a simple life proves more complex and contradictory than one would imagine, so the reversal of hunter and hunted here provides unexpected suspense and plot surprises. These two fine and remarkable novellas, each a modest tour de force, are sure to advance Messud's critical standing and to broaden her readership.