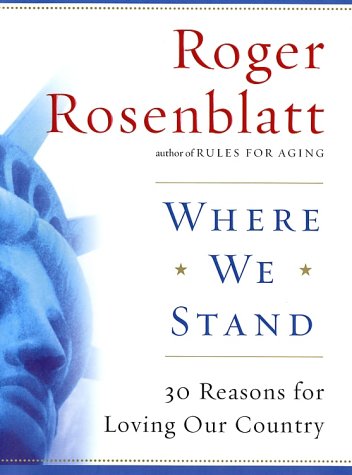 WHERE WE STAND: 30 Reasons for Loving Our Country

After September 11, commentators noted a widespread American desire for simplicity and patriotism—and this collection of homilies by noted essayist Rosenblatt () seems designed to fit that nostalgic mood. Whether taking on topics such as politics, sports or his own childhood, Rosenblatt offers an upbeat look at the American character. Despite his occasional plea for Americans to be more comfortable with complexities, Rosenblatt's world of simple dichotomies appears to be taken right out of —but it's hard to disagree with them. Baseball, small towns, schoolteachers and the "American people" are good; people who promote censorship and terrorists are not. "Speak of fair play, unity, human rights, decency," he tells politicians, "you'll get us every time." Some of the most intriguing of these short essays are those in which Rosenblatt displays his political opinions: he's for increased government involvement and gun control, and thinks the Clinton scandal was overblown—all attitudes he believes he shares with a majority of America. Written with a gently humorous, self-deprecating tone that will attract many who don't agree with the author's politics, this could be a by-the-cash-register pickup that will reassure Americans during the summer months.