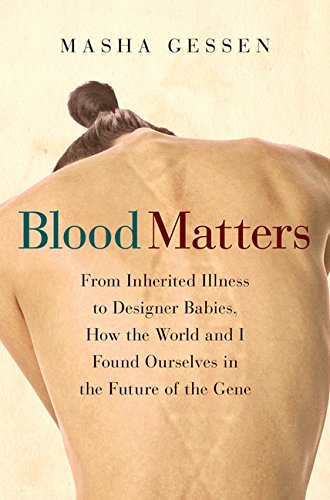 Blood Matters: From Inherited Illness to Designer Babies, How the World and I Found Ourselves in the Future of the Gene

This energetic but unfocused account awkwardly merges several strands: the author's experience with the threat of breast cancer, discussions of genetic inheritance in Jewish families and a look at how the ability to test for genetic predispositions to various diseases is changing lives. With a family history of breast cancer, journalist Gessen ( ) was not surprised to learn she had inherited a “deleterious mutation” in the BRCA1 gene, one of two genes known to be linked to breast and ovarian cancer. The BRCA1 mutation was first discovered in Jewish women, a “compact population” with a higher-than-average breast cancer rate. Gessen describes her narrow options, with “nondirective counseling” steering her toward prophylactic removal of her breasts and ovaries. Then she jumps the track to talk about Dr. Henry Lynch, who, in 1966, first suggested that predisposition to cancer might be hereditary. Gessen also covers Huntington's disease, maple syrup disease among Old Order Mennonites, eugenics and how a genetic testing program is affecting marital choices for some Orthodox Jews. Gessen covers a fair amount of ground, but in a haphazard fashion. The book's strongest parts are on genetics and heredity in the Jewish community.