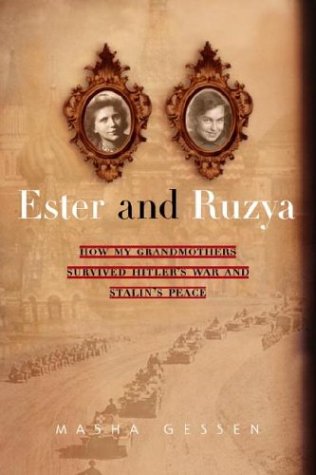 ESTER AND RUZYA: How My Grandmothers Survived Hitler's War and Stalin's Peace

After leaving Russia in 1981 when she was 14, journalist Gessen visited 10 years later and moved back a few years after that. The transition represents the two major themes of her memoir: displacement and familial ties. After reconnecting with her Russian kin, Gessen seeks to explore her roots. Rather than tell her own story, Gessen reaches into her family's past, weaving together the stories of her two grandmothers as they live through the turmoil and terror of the first half of the 20th century. The two Jewish women, born in separate countries, meet and become friends in 1949, after fleeing persecution and war in Poland and Russia. The terrors strengthen their friendship, Gessen writes: "It was probably most like family: a bond that once established, was believed permanent." Both have children, who then fall in love with each other and have children of their own, including Gessen. By using the present tense, Gessen gives the memoir a sense of immediacy. She also deftly puts her grandmothers' experiences in context by describing the brutal realities of Stalin's regime and the desperation of Jews trying to escape Nazi concentration camps. This blend of historical depth with personal experience is a powerful mix, illuminating how family and friendship can grow in even the darkest eras.