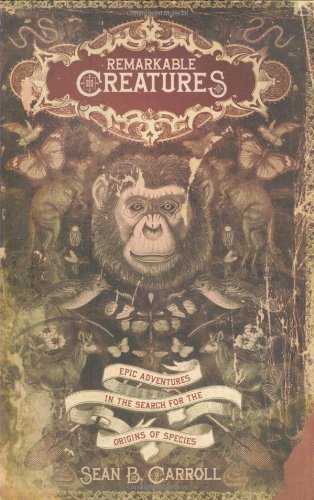 Remarkable Creatures: Epic Adventures in the Search for the Origin of Species

It's unclear whether the title refers to the daring naturalist/explorers Carroll depicts or the creatures whose remains they found. In this thoroughly enjoyable book, Carroll ( ), a molecular biologist at the University of Wisconsin, provides vignettes of some of the fascinating people who have made the most significant discoveries in evolutionary biology. He starts with some of the experiences and insights of great explorers like Alexander von Humboldt, Charles Darwin, Alfred Russel Wallace and Henry Walter Bates, then turns his attention to paleontologists who searched for the fossil evidence to support the new theory of evolution. Among them are Eugène Dubois's discovery of Java Man; Charles Walcott's discovery of the Burgess Shale and the evidence it provided for the Cambrian explosion; and Neil Shubin's recent discovery in arctic Canada of Tiktaalik, the intermediary “between water- and land-dwelling vertebrates.” Carroll closes with studies of human evolution, from Louis and Mary Leakey to the advances of Linus Pauling and Allan Wilson, which indicated that Neanderthals were cousins of rather than direct ancestors. While there's little that's new here, Carroll does weave an arresting tapestry of evolutionary advancement. Photos, maps.