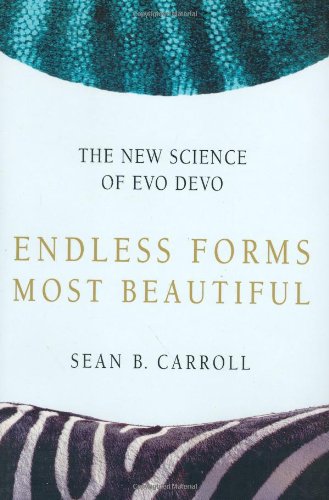 ENDLESS FORMS MOST BEAUTIFUL: The New Science of Evo Devo

Cobb County textbook stickers aside, evolutionary natural selection offers a pretty straightforward explanation for the forward march of species through history; a mutation that better equips a given organism to survive is passed along to its heirs, becoming more common as successive generations flourish. The actual process by which mutations happen, however, was far more mysterious until scientists turned to the study of evolutionary development (known by the somewhat unfortunate moniker "Evo Devo"). One such scientist is Carroll, a genetics professor at the University of Wisconsin–Madison, who guides us along the broad contours of development ("the process through which a single-celled egg gives rise to a complex, multibillion-celled animal") and the ways in which its study sheds light on the underlying mechanisms of evolution. He explains in concrete terms how small changes in a species's genetic code of a given species can lead to dramatic differences in physiology is the "missing piece" of evolutionary theory, Carroll argues. The book is as much a salvo in the continuing battles between creationists and evolutionists as it is a popularization of science, and Carroll combines clear writing with the deep knowledge gained from a lifetime of genetics research, first laying out the principles of evolutionary development and then showing us how they can explain both the progression of species in the fossil record and outliers like a six-fingered baseball pitcher.