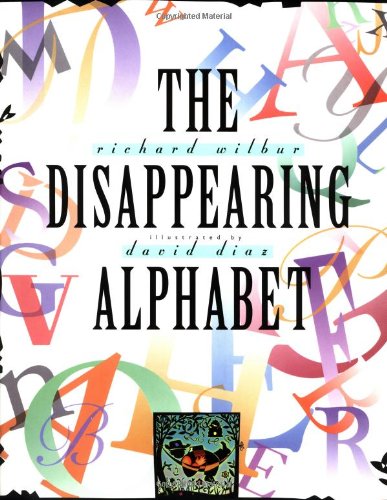 If the alphabet started to disappear, as the premise of this inventively witty book sets up, then the world as we know it would, too. Wilbur (Opposites), a Pulitzer Prize-winning poet, starts at the beginning and imagines what life would be like without each of the 26 letters: ""If [B] were absent, say, from BAT and BALL,/ There'd be no big or little leagues AT ALL."" In addition to pondering words without particular letters, Wilbur playfully points out the symbols' other important functions (e.g., in music, ""If there were no such thing as C,/ Whole symphonies would be off key""; or in reference to the roman numeral M in mathematics, ""If M should vanish, we would lose, my dears,/ MINCE PIE, MARSHMALLOWS, and a thousand years""). Diaz (Smoky Night), in a clever quip, employs cut-outs as his medium; the rainbow-hued silhouettes set against a white background serve to either amplify or clarify the text. For the destruction of the letter Q, for example (as a result of which ""Millions of U's would then be unemployed""), Diaz pictures a wrecking ball aimed at a giant Q while the ground is littered with discarded Us. And, in W, for a more obscure reference to the watermelon shape in Cassiopeia, Diaz enlightens readers with a picture of the constellation. With plenty of brain-tickling words to grow on and a plethora of visual puns, watch this one vanish from the family bookshelf. All ages. (Oct.)
close
Details