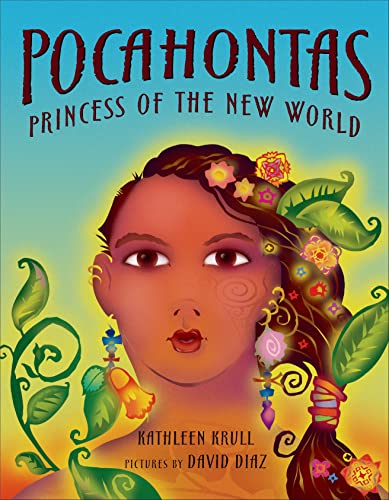 Pocahontas: Princess of the New World

Radiant illustrations and an attention-grabbing narrative introduce the short life and times of Pocahontas, the spirited Powhatan princess of John Smith fame. Krull and Diaz, who collaborated on , here unite their artistic and storytelling talents to provide an accessible portrait of the Native American girl who helped maintain a fragile peace between her tribe and English colonists. An easygoing and sometimes playful tone draws readers in: "...Pocahontas was quite the royal princess... she knew how to get her own way—as a proper princess must." With speculations based on her research, Krull personalizes the girl who found herself at the crossroads of two cultures. For example, "Princess Pocahontas probably avoided certain jobs. She couldn't be seen burying garbage. Perhaps she helped to make pottery… perhaps she just cartwheeled and joked her way out of chores." Diaz's computer-colorized lithographs glow with vibrant yellow, green and purple hues. Each brown and tan character cut-out emanates a shimmering yellow aura, and faces are always in profile (with the exception of the front and back covers that feature a young and older Pocahontas, respectively). Backing the large, rectangular text blocks and facing illustrations are jungle-like floral motifs that resemble iridescent wallpaper, the organic shapes complementing carefree, dancing images of Pocahontas and her people. A source list and epilogue round out this story of a princess who eventually ended up in England and lived to the age of just 22. Ages 6-11.