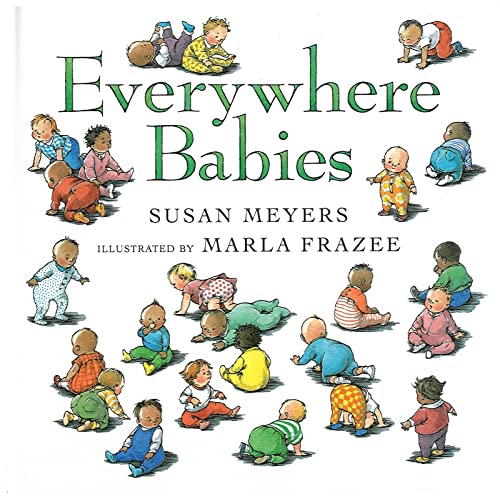 ""Every day, everywhere, babies are born,"" writes Meyers (Hello Jenny), as Frazee (The Seven Silly Eaters) presents the first in a series of wry, elegant watercolor vignettes: a row of multiracial, swaddled newborns whose expressions range from ""How did I get here?"" to utter boredom. The pages that follow prove that ministering to babies is all-pervasive as well. ""Every day, everywhere,"" as each spread announces in hand-lettered display type, babies are either collecting kisses, getting schlepped, exhausting their parents (a state that Frazee portrays with knowing and hilarious precision), toddling or growing. Rhyming text in smaller type elaborates on each theme: e.g., to ""Every day, everywhere, babies are carried "" Meyers adds, ""in backpacks, in front packs, in slings, and in strollers, in car seats, and bike seats, and on Daddy's shoulders."" As Meyers builds to the expected coda (babies being ""loved for trying so hard, for traveling so far, for being so wonderful... just as they are!""), it's Frazee's canny wit that tips the work away from sentimentality to evoke a wide range of emotions. A charming paean to the adoration (and accessories) that families lavish on their offspring. Ages 2-5. (Apr.)
close
Details