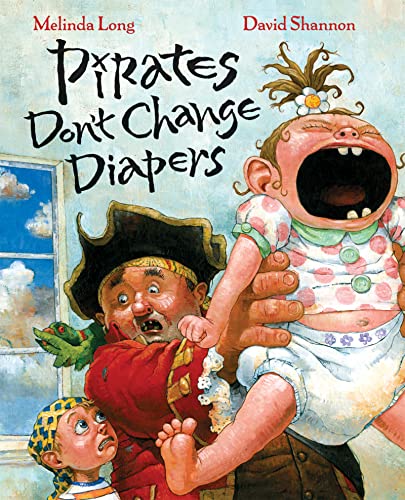 Plucky young Jeremy Jacob is reunited with Captain Braid Beard and his crew of daft, dentally challenged buccaneers in a follow-up to the bestselling . This time, Jeremy clearly has the upper hand: he won't let the pirates dig up the treasure they buried in his backyard at the end of the previous book until they help him placate his cranky baby sister, Bonney Anne (pirate aficionados will note that her name is a nod to real-life female pirate Anne Bonny). The story unfolds rather predictably—but just as entertainingly as the original: the pirates turn out to be washouts as nannies, jokes fly about dirty diapers and strained spinach, and, of course, "the wee lass" Bonney Anne ends up being the key to recovering the treasure. But Long's piratical dialogue still delivers a juicy read-aloud: what reader of any age won't relish the opportunity to say "Aargh!" or declare "Rock on!" as the crew does in unison when Braid Beard orders them to rock Bonney Anne to sleep? And Shannon's voluptuously colorful and comic paintings runneth over with comic mayhem, sly details (somehow, the pirates manage to find a pirate show on Jeremy's TV) and no end of goofy expressions. Ages 3-7.