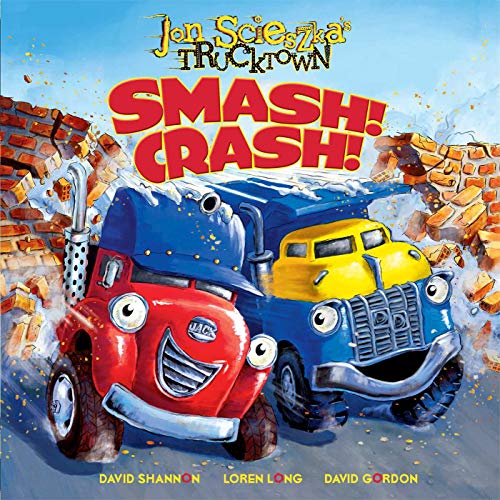 Little gearheads will rally to this demolition derby, carried out by a gregarious all-motorized cast. Jack Truck, a red flatbed with chrome exhaust stacks, and best friend Dump Truck Dan, a blue guy with a yellow cab and mud flaps, adore the smash and crash of work in progress. To stir up noisy trouble, “Jack and Dan charge Cement Mixer Melvin,” who mixes sand and water for his job. “No. I can’t get messy,” Melvin tells them, but with a “smash-crash!” mischievous Jack and Dan leave him covered in gray glop. The friends help Monster Truck Max stack orange-and-white oil drums, and they assist baby-pink Gabriella Garbage Truck (who has a teddy bear tied to her front bumper) in building a pirate fort from an old boat. Scieszka ( ) revs readers up with gear-grinding noise and rowdy antics that echo Pixar’s animated . Celebrated illustrators Shannon, Long and Gordon embed mechanical shapes in their punchy display type, and they contribute panoramic vistas of Jack and Dan’s playgrounds: freshly dug foundations, vast junkyards and dusty lots with buildings slated for destruction. In a nod to Scieszka’s “Guys Read” initiative, most of the machines are male, but the burliest of all is Wrecking Crane Rosie, so tall she requires a vertical gatefold. Heads and taillights above legions of other truck titles, this smash-crash series opener is bound to be a hit. Ages 3-7.