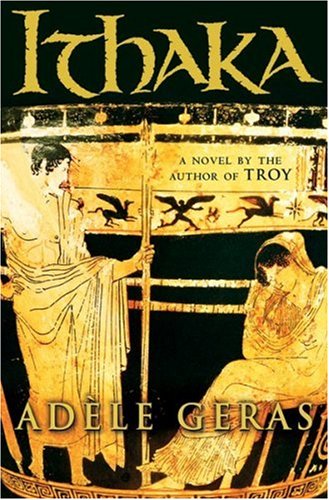 In this sequel to , Geras once again shows her skill at fashioning multidimensional characters from mythological figures and making them accessible to a 21st-century audience. Set in Ithaka during the aftermath of the Trojan War, the story unfolds from the point of view of 14-year-old Klymene, faithful servant to Queen Penelope. While Penelope anxiously awaits her husband's return from battle, trouble arises as suitors, convinced that Odysseus is dead, invade the court demanding that the queen choose one of them to marry. Meanwhile, a new member of the household, beautiful and fickle Melantho, wins the heart of Penelope's son, Telemachus, whom Klymene secretly adores. Klymene's faith and courage are repeatedly tested as the suitors reek havoc in the palace and her chances of winning Telemachus' heart seem to grow dimmer each day. As in , the Gods and Goddesses (including Pallas Athene, Poseidon and Eros, among others, flit in and out of Klymene's sight) play a key role in determining various characters' fates. Lovers of Greek mythology will appreciate the authentic flavor of this book, but readers need not be familiar with to follow the plot or to recognize themes of loyalty and unrequited love, which are brilliantly and movingly displayed throughout this ambitious, gripping novel. The author's feminist perspective once again adds a fresh, thought-provoking twist to the classic tale. Ages 14-up.