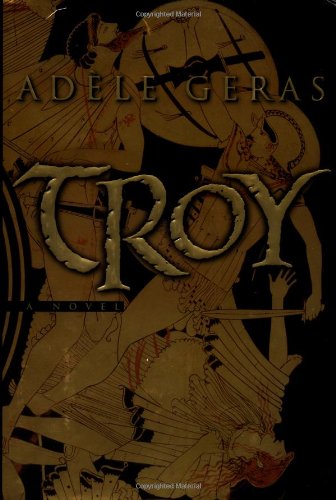 With exceptional grace and enormous energy, Geras (The Tower Room; ) recreates the saga of the Trojan war from a feminist perspective, by delving into the hearts and minds of the women behind the scenes. The author plunges readers into the thick of the action to become intimately acquainted with both familiar mythological characters and the common folk—around whom this retelling revolves. She focuses primarily on two orphaned sisters: Xanthe, caretaker of Andromache's child and a healer in the "blood room" where the injured men are taken, and Marpessa, Helen's favored assistant who can see the gods. The siblings are devoted to each other until Aphrodite reeks havoc in their lives, causing them to fall in love with the same wounded soldier. Although Xanthe nurses young Alastor back to health, he chooses instead soft-spoken Marpessa to be his lover, despite the fact that his mother has already arranged for him to be married to a girl of higher standing. While jealousy rends the bond between sisters, the fighting outside the city walls continues. Hector, Paris and Achilles play out their dramatic finales while "gossips" (older servants reminiscent of a Greek chorus) recount tales of victory and woe (the infamous "Judgment of Paris," the tale of how Ulysses was drafted into the Trojan War, etc.). Meanwhile, gods and goddesses—Zeus, Hermes, Ares, Athena, Poseidon and Aphrodite—drift in and out of people's lives like fragments of dreams to offer mixed blessings, prophesies and consolation. The effect of this novel is similar to that of a confidently conducted symphony that brings new meaning to a renowned masterpiece: harmonious strains alternate with cacophonous segments to evoke a vast array of moods. Multidimensional images of familiar mythological characters emerge—deities who hold the fates of Trojans in their hands as well as human heroes and heroines who change the course of the war. But Geras focuses most of the attention on the universal experiences of mortals struggling to survive. Mythology buffs will savor the author's ability to embellish stories of old without diminishing their original flavor; the uninitiated will find this a captivating introduction to one of the pivotal events of classic Greek literature. Ages 14-up.