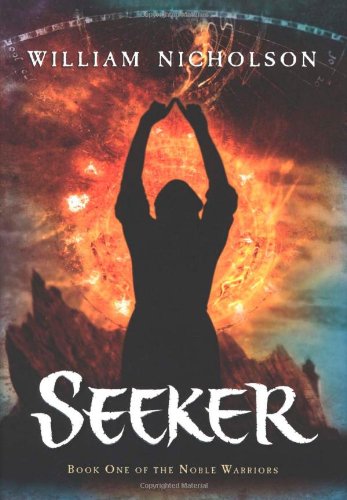 Nicholson (the Wind on Fire trilogy) begins his massive tale, the launch title of the Noble Warriors series, with a creation myth of sorts, introducing an abandoned baby that is adopted by a warrior and becomes "one god with the many names: the Wise Father, the Loving Mother, the Lost Child, the Quiet Watcher, the All and Only." In time, a fortress called the Nom is built to shelter the child, his protectors are known as the Noble Warriors or Nomana. As the empire of Radiance decides to wage war against Nom's homeland of Anacrea, three different people are drawn to Nom to join the fight: 16-year-old Seeker, who follows his brother into the ranks; Morning Star, who follows her mother; and the Wildman ("They called him the Wildman because he had been known to kill those who did not delight him, and it did not delight him to be unloved"). The soldiers of Radiance emerge as ruthlessly single-minded: when one of their scientists invents a way to turn blood into an explosive (its trigger: any shallow cut), an eery parallel to today's suicide bombers begins to unfold. As with his previous trilogy, screenwriter Nicholson ( ) shows his skill at constructing a fantasy realm, lacing his narrative with customs and norms that give the land of Anacrea a palpable feel. His Noble Warriors and their moral code are particularly intriguing, and the book concludes with a terrific set-up for volume two. Ages 12-up.