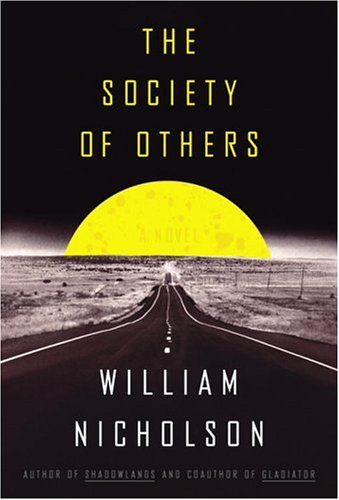 THE SOCIETY OF OTHERS

Nicholson's screenplay for featured some tight dialogue—also a component of the author's Tony-nominated on Broadway in 2003. After three YA novels, Nicholson's first-person debut novel for adults rewrites for the war on terror era, with mixed results. A young, unnamed, nihilistic British protagonist hitches his way "deep into Europe," his destination determined by the first truck that stops for him. After the truck driver runs a checkpoint in an unnamed former eastern bloc country, the protagonist is abruptly deposited, thrown from the truck moments before it is captured and set ablaze by thugs. Its contraband: books by a politically minded philosopher . It becomes steadily harder to suspend disbelief as the protagonist, with innumerable wry asides, tries to negotiate with the members of a "movement" with whom he falls in, to cope with a murder he has unknowingly committed and to get back across the border. Movement characters like Petra, Egon and Eckhard are little more than props; the philosopher's wisdom, threaded in throughout, doesn't help. The moral of the story—you snots in the West don't know how good you have it—comes through so early that the protagonist's final transformation to good, loving citizen and son feels redundant.