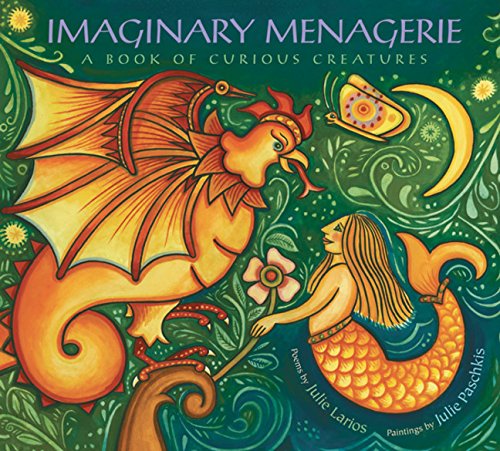 As in an illuminated manuscript, the artwork shimmers in this verse catalogue of creatures from mythology and folklore, a sequel of sorts to . Outshining the quiet poems, Paschkis’s gouache paintings adorn the title of each poem with a gracefully illustrated initial. The “P” of “Phoenix” is shaped like a wing, and the W of “Will o’the Wisp” consists of espaliered tree limbs. Although the paintings create a unified whole, stylistically each evokes the country of its beast’s origin. The firebird’s tail, for example, resembles a lacquered Russian miniature, and the Thunderbird looks like a Tlingit carved raven. The poems themselves are both thoughtful and appropriate, describing each creature’s characteristics and also nimbly drawing readers directly into the imaginary scene: “Troll arms will grab you/ and put you in a pot.” Readers unfamiliar with some of the more exotic creatures—the cockatrice, naga or hobgoblins—will appreciate the brief, historical descriptions found on the book’s last page. An altogether intriguing collection. Ages 6-9.