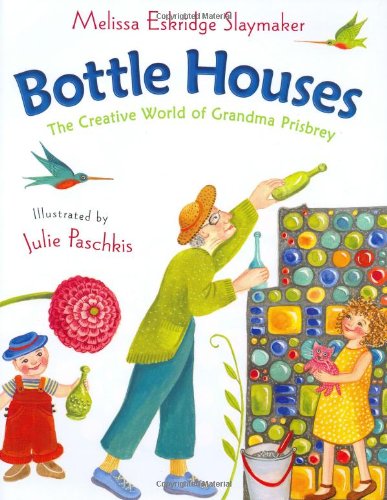 The title character's Bottle Village is a real place, and this spirited biography—Slaymaker's debut—describes its creation and its resourceful creator. Readers observe Grandma Prisbrey as she covers her scant third of an acre with eccentric, captivating structures built of glass bottles (which made her an unwitting hero both to folk art enthusiasts and to environmentalists). "What some people throw away," says Grandma Prisbrey, "I could wear to church." In matter-of-fact prose, Slaymaker recalls Grandma Prisbrey's unconventional early life traveling with her family in a trailer—even then she was a collector. When the woman decides to settle down, she soon realizes that the city dump and its thousands of bottles could provide her with building material: "all she had to buy was cement to hold them together." Fun asides offer insight into the heroine's offbeat humor ("A dairy inspector told me it's against the law to use milk bottles for anything but milk, so I quit using those.... I've got plenty without them"). Taking a cue from the woman's kaleidoscopic architecture, Paschkis renders Grandma Prisbrey's village in a series of multi-textured patchwork planes studded with gem-like reds, greens and blues. The mosaic motif extends as far as the skirts of visitors and the wings of butterflies. The actual photographs of the village in the final two-page afterword almost pale beside Paschkis's versions. Young readers who, like Grandma Prisbrey, "can't draw a car that looks like one," will be cheered by her off-handed reaction to her reputation as an artist: "I guess there are different kinds of art." Ages 5-9.