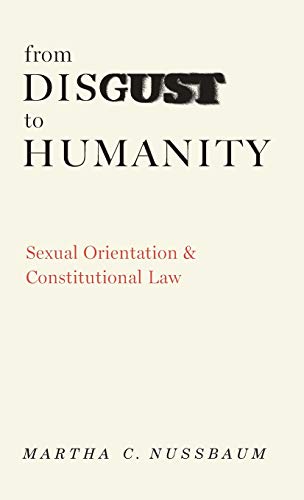 From Disgust to Humanity: Sexual Orientation and Constitutional Law

A meticulous consideration of the legal issues surrounding same-sex relations grounded in a far-reaching investigation of how the notion of disgust has determined both civil legislation and public opinion. Identifying a politics of disgust that centers on irrational fears of contamination, “penetrability,” and loss of social “solidarity,” Nussbaum ( ) opposes such problematic foundations for legislation with her own notion of a politics of humanity, based on the need for imaginative engagement with others. Linking imagination with America's founding principles of equality and respect, the author vindicates sexual orientation rights as instrumental to the pursuit of happiness, before engaging with contentious rulings on same-sex marriage, sodomy, and discrimination. An elegant and eloquent defender of sexual freedom, the author is at her best describing the insidious role of disgust in law. However, her frequent recourse to John Stuart Mill would seem to demand a more detailed defense of his ideas on harm, and her reflections on marriage add little to the debate. Nonetheless, as the recent public discourse about empathy among Supreme Court judges indicates, Nussbaum's passionate advocacy of the power of imagination is profound and timely.