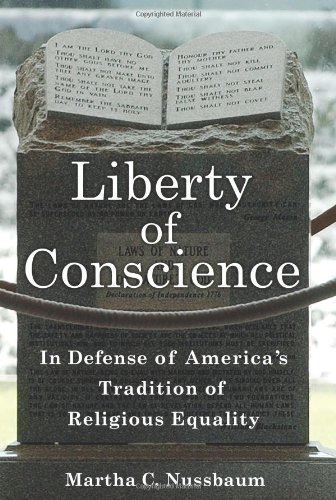 Liberty of Conscience: In Defense of America's Tradition of Religious Equality

In this engrossing history of the religion clauses of the First Amendment, Nussbaum ( ) makes a strong, thoroughgoing case for America as a haven of religious liberty for believers of all stripes. Beginning with an illuminating rehabilitation of Rhode Island founder Roger Williams as America's earliest defender of religious equality, Nussbaum continues by examining how Williams's ideals have been both upheld and abandoned throughout the nation's history. After detailing the adoption of the establishment and free exercise clauses, Nussbaum comments at length on how these fairly general, vague clauses have been fleshed out by more than two centuries of case law. Refreshingly, Nussbaum does not add to the acrimonious cacophony around the idea of separation of church and state. Rather than pushing for strict separation, she argues for what philosopher John Rawls calls “overlapping consensus,” which echoes Williams's belief that citizens who differ greatly on matters of ultimate meaning can still agree to respect each other's liberty of conscience. Nussbaum writes engagingly and with generosity; her critiques, particularly those of opinions written by Justices Scalia and Thomas, are pointed but respectful, and she demonstrates warm regard for Supreme Court plaintiffs who have braved persecution as they have followed the dictates of conscience.